On 24th December DEMS celebrated Christmas as well as Saka Sir hind. The latter was celebrated in remembrance of Tej Bahadur Singh and Guru Gobind Sahib.

Guru Gobind Singh’s son attained martyrdom on 25/26 December 1704 at a very young age. This is known as Saka Sir hind. Every year on 24 to 26 December, Shaheedi Jor Mela is organised at Fatehgarh Sahib Punjab, India, to commemorate the supreme sacrifice at the place of their martyrdom.

Then to the surprise of the children, Santa Claus came and distributed gifts and spent some time with children.

A Cherry on the cake 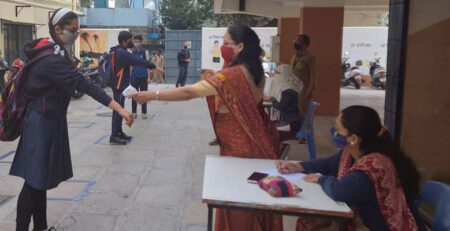